Our goal is to provide professional on time service, fast delivery, and product quality. Loudbank.com strives to brings value to you purchasing experience. We put forth the right gardening products and expertise to make your grow efforts easier and more productive. Our knowledgable team is dedicated to providing quality equipment to commercial and residential growers. Our expertise will ensure that your operations are operating with maximum efficiency, output and quality.

Most of our native local species of worms have been destroyed or displaced by human activity; the kinds we usually see are descendants of hardier worms intentionally or accidentally introduced to North America by early European and Asian immigrants. There are now about 180 different species of earthworms in the U.S. and Canada, a third of which are non-native (including night crawlers). The typical garden earthworms are NOT the same as Redworms or “red wigglers” (Eisenia foetida), the non-native species most commonly recommended for use in home worm composting.

Earthworms are primitive but fascinating creatures. They don’t have eyes, but they do have special light-detecting receptors. Light is a bad thing for creatures whose natural habitat is underground, and worms have evolved to move away from light sources, hence their burrowing instinct. They “hear” by detecting vibrations, and they produce mucus or “slime” in reaction to stress (e.g. being yanked from the ground). They also have voracious appetites, some species can eat their weight in organic matter every day.

Worms are hermaphroditic: each worm has both male and female reproductive organs in its elongated, muscular, tube-like body. Typically, two earthworms join side-by-side in opposing directions to mate, and each member of the pair produces an egg capsule from which one to several immature worms eventually emerge. Redworms are among the most prolific breeders.

This is a good time to discredit a common misconception about worms. If a worm is cut in half by a shovel or by an over-enthusiastic tug from a curious child, the two parts won’t heal and live to create new worms. The head end (with its tiny brain and five hearts) can’t survive without the tail end (with its digestive system), and the worm simply dies.

You can use several techniques to encourage greater earthworm populations in your garden: (1) Avoid frequent tilling or cultivation of soil; (2) Minimize the use of synthetic fertilizers and pesticides, all of which disturb naturally occurring soil micro- and macro-organisms; (3) Allow leaf litter to remain on soil year-round, to provide a food source for worms; and (4) “Sheet mulch” bare soil, using layers of cardboard, mulch, and compost to keep soil cool and moist and to provide a source of organic material for worms to eat.

There are a few different species of compost worm. They live in the first 12 cm of topsoil on a rich diet of rotting vegetable matter, but don’t eat soil. They can be found in manure heaps and leaf piles, but you won’t find them in normal garden soil. To a compost worm protozoa, bacteria and fungi are like salt and vinegar on fish and chips – delicious. They do not build permanent burrows in their habitats, but prefer to burrow randomly through the topsoil and rotting matter. When it’s cold or really hot they will burrow deeper down and ball up, covering themselves with slime to protect themselves from drying out and hibernate to conserve energy. 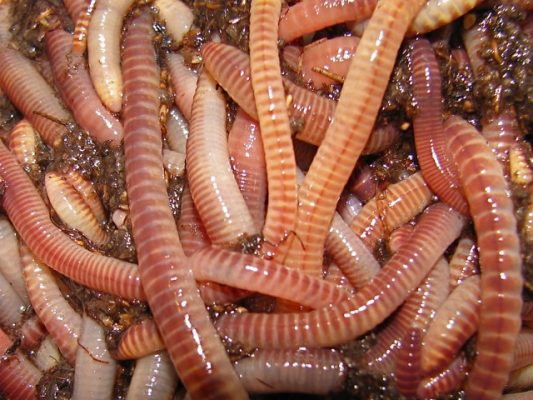 The Earth-worker Worm and the Lumbricus terrestris in particular, is the earthworm you are most likely to see in your garden, busy at work tilling the soil making it more airy and nice for plants to grow in. They make long vertical burrows of up to a few feet deep, leaving their poop, known as worm casts at their entrances. They eat some soil and are particularly partial to leaves, even preferring some varieties over others.

They come up to search for food at night and Darwin, whose studies were mainly carried out on these worms found that they can even find the best shaped leaves for bunging up their burrows with. The Root Dwelling Worm are deep burrowers, inhabiting the areas around plant roots, rich with decaying roots and fungi and are widespread in farmlands. You won’t see these worms, as they never venture above ground. The squirting worm Didymogaster sylvaticus  and the huge gurgling Australian Megascolides australis covered in the About Worms section are the more freaky examples of this type of worm. These two are extremely rare and hard to track down.

Night crawlers also mate on the surface. They are hermaphroditic but do not self-fertilize. Following mating, each worm forms a tiny, lemon-shaped cocoon out of a liquid secreted from its clitellum, the familiar-looking bulge seen near the first third of the earthworm’s body. The sperm and egg cells are deposited inside the cocoon, and it is buried. After a two- to four-week gestation period, the baby worms emerge. Earthworms are a source of food for numerous animals, like birds, rats, and toads, and are frequently used in residential composting and as bait in commercial and recreational fishing. Their numbers are strong throughout their range—they’re even considered agricultural pests in some areas—and they have no special status.

Get The Loudbank APP on your Homescreen!